I’ve decided this one is ‘walk of the month’ for January.  We walked it yesterday, having been confined to the house by the truly miserable January weather for a few days.  We convinced ourselves that once we were out and about, all would be well – and it was.  The sun came out followed by all manner of birds and beasts!  I think there was more variety of wildlife on this walk than we’ve ever seen before in one walk!

The directions are taken from the Scottish Borders Council – Paths Around Kelso booklet which can be downloaded from here: https://www.scotborders.gov.uk/downloads/file/684/kelso

I hope you enjoy reading about it!

Sprouston is a village just about 2 miles outside of Kelso and at one time boasted the only railway station built in Scotland by the (English) North Eastern Railway Company.  The (Scottish) North British Railway Company were not impressed by this and retaliated by refusing to publish details of connecting trains to England in the timetables.  This petty animosity, which presumably made life fairly difficult for their passengers, continued according to Alistair Moffat ( The Borders – a History of the Borders from the Earliest Times)  until British Rail amalgamated the railway companies in 1948.

We make our way out of the village via a grassy track towards the river passing a mysterious plaque on the wall of a large house on the way:

We continue down the track to the river and turn to walk downstream.  Almost immediately we catch sight of a kingfisher zipping along on top of the water – too fast for pictures sadly!

The river is full of life today.  We see hundreds of mallards as well as tufted ducks, goosanders, little grebe, cormorants, redshank, lapwing and oyster catchers.  Greylag geese fly overhead, heron strut along the riverside and we see a pied wagtail flitting about.

At one point we need to turn away from the river and take a little detour to avoid some private land.  This path passes by the disused Banff mill – now used as a fishing hut.  Amongst the trees here we see snowdrops and winter aconite: 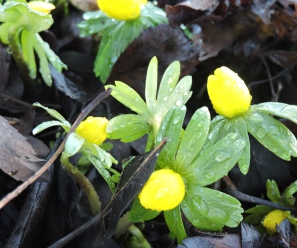 As we find our way along the farm tracks and back towards the river bank, we’ve wandered off the edge of our OS map, so I wander ahead in the sunshine as Mr RR sorts it out: 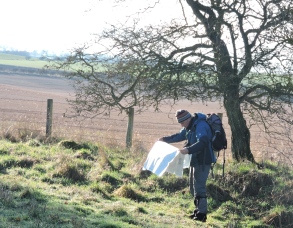 Just a few feet further on, and I spot what I think is a diving duck of some sort and then quickly realise is actually an otter!  Oh my goodness….whoever thought we’d see a real live otter, in the middle of the day, swimming and diving just yards away from us.  We’re mesmerised as he repeatedly dives, swims a little way and dives again.  Several times he brings a fish up with him and once or twice heads for the far bank to eat it as we watch.

We stand and watch for ages and ages, he’s so wrapped up in catching lunch that he’s totally oblivious to our presence.  Eventually we just have to move on, but we don’t go far as there’s a handy bench just downriver and we sit down for a hot drink and a snack, still catching sight of him every now and then, and enjoying the peace and the sunshine:

We follow the Tweed on downstream towards Redden Haugh, where the river is the border between England and Scotland and here we have to turn away and find our route back towards Sprouston.

A short hop along a busy road and a left turn has us heading towards the now disused Carham Station.  And here, there are more treats is store!  As walk down this long straight road, a pair of hares leap out in front of us and then sit themselves down on the grassy verge: 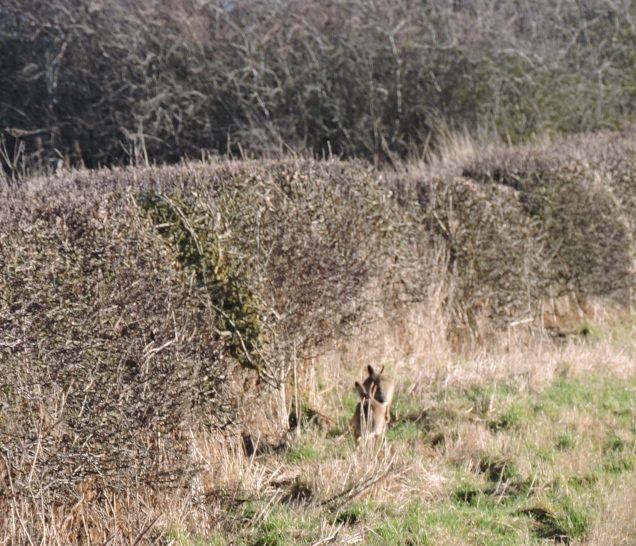 Eventually they catch on to the fact that we’re behind them and scurry away through the hedge and we walk on, very pleased with ourselves.

We’re soon turning onto the old railway line and walk past the remains of the platform on our way back towards Sprouston.  On the way we pass some impressive lime kilns, once belonging to the splendidly named Nottylees Quarry.

and a very ornate stile…..

Halfway along and in the far distance Mr RR spots a flock of swans feeding in the middle of a field:

It seems an awful long two and a quarter miles on this railway line and I’m beginning to feel decidedly rickety, but finally we’re back in the village exhausted but delighted that we decided to head out today!

2 thoughts on “January – Walk of the Month!”