A visit to The Gallery in the hamlet of Smailholm to preview their latest exhibition – Hive of Creativity ( http://www.kinsman-blakeceramics.co.uk ), gave us a chance to follow up with a walk to Smailholm Tower.  Both are well worth the effort! 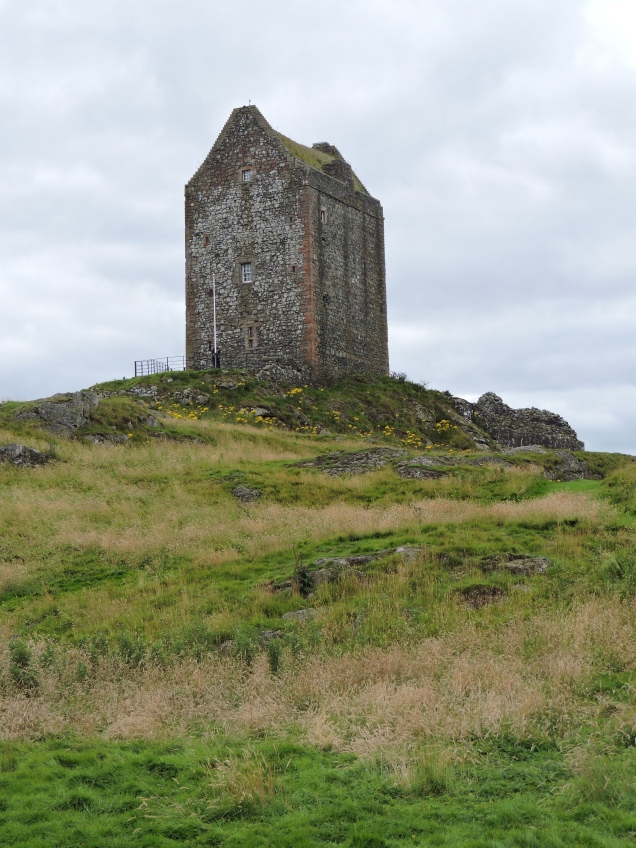 END_OF_DOCUMENT_TOKEN_TO_BE_REPLACED

Mr RR and I visited Paxton House last Sunday – an 18th century mansion on the River Tweed.  We didn’t go into the house this time, but had lunch in The Stables Tea Room and then wandered about the grounds before taking a short ramble along the river.

Here are some highlights!

The house was designed by John Adam, a Scottish architect (1721 – 1792), for Patrick Home, a rich young man who considered his family home near Eyemouth on the north-east coast too cold and draughty for a man of his means.

The herbaceous borders were looking splendid:

My favourite flower was this beautiful day lily:

Lots of bumblebees were enjoying the flowers too:

I’ve tried to identify this one but sadly the pictures aren’t good enough.  the Bumblebee Conservation Trust – http://www.bumblebeeconservaton.org – has clear pictures for identification but there are so many different species – even lots of different ones with white tails like these, that it’s impossible to say.

We walked on beside the croquet lawn and putting green to a small pond filled with waterlilies:

and then down over the hill through the woods to the River Tweed. 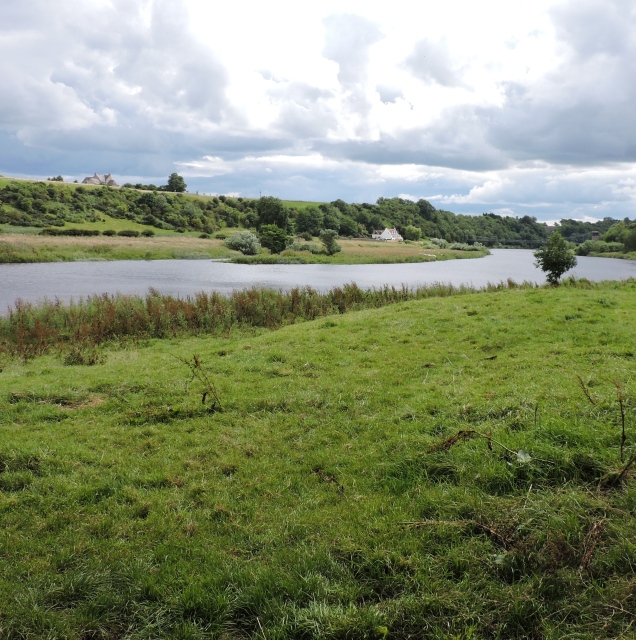 The path took us along to a bird hide where we stopped to see what we could spot.  An information board tells us that, because we’re not far from the sea here, the river is tidal and the mixture of fresh and salt-water means that often sea birds are seen and even seals  on occasion.  We see some ducks which are too far away to identify but otherwise nothing of interest, so we follow the path on through the woods and over a stile until we’re right next to the river.

Right in the middle of the River Tweed at this point is the border between Scotland and England – so…..we’re in Scotland as we ramble along….but those sheep in the picture above are in England; they are obviously keen to cross over though as they keep edging towards the water and staring longingly across at us!  Clever sheep!

About half a mile downstream we can see the Union Chain Bridge in the distance: 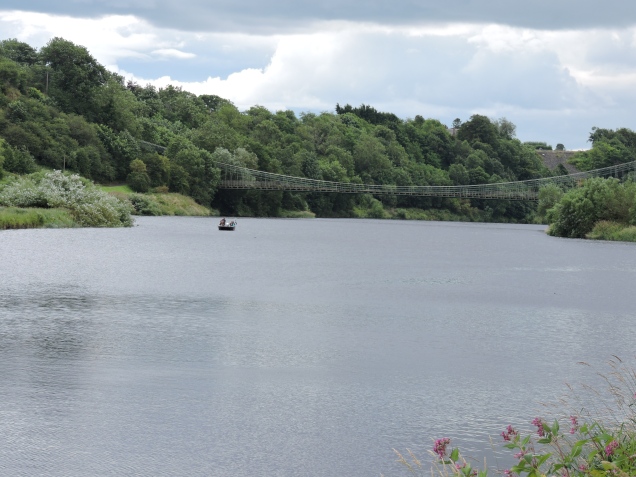 This is the oldest surviving iron suspension bridge in Europe!  It was the very first one to be designed to take vehicles although now it’s not strong enough to take more than one car at a time: 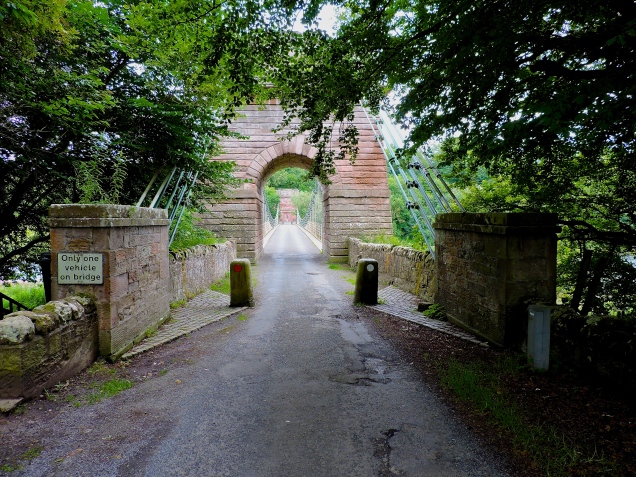 By the late 19th century it was becoming imperative to have a safe crossing to take coal and lime from Northumberland to Berwickshire for export. Before the bridge was built the only way to cross the Tweed between England and Scotland at this point was at the New Water Ford which could be perilous in flood water and dangerous even at high tide. So along comes Captain Samuel Brown RN who, whilst still in the navy, had pioneered the design.  It took less than a year to build and was opened on 26th July 1820 with a demonstration of its strength by Captain Brown who drove across in a curricle followed by 12 loaded carts weighing 20 tons, and 600 spectators!  The event was witnessed, not only by the Scottish engineer Robert Stevenson, but also by the 18 year old Isambard Kingdom Brunel who, of course, went on to build the infamous Clifton Suspension Bridge across the Avon Gorge in Bristol. 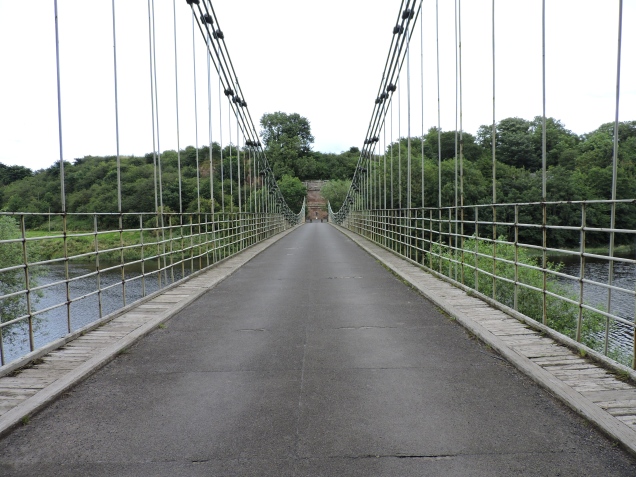 At the far end you can see what remains of the Toll Keeper’s Cottage built into the red sandstone cliffs on the English side.  The actual cottage was demolished in 1955 but in the early 1900s a family of five lived in its two rooms.

We reach the crossing point and spend some time looking over the border and watching some German motorcyclists taking pictures of themselves beside the border signs.  I decide I should do that too…..although Mr RR politely declines to have his picture taken in either Scotland or England! 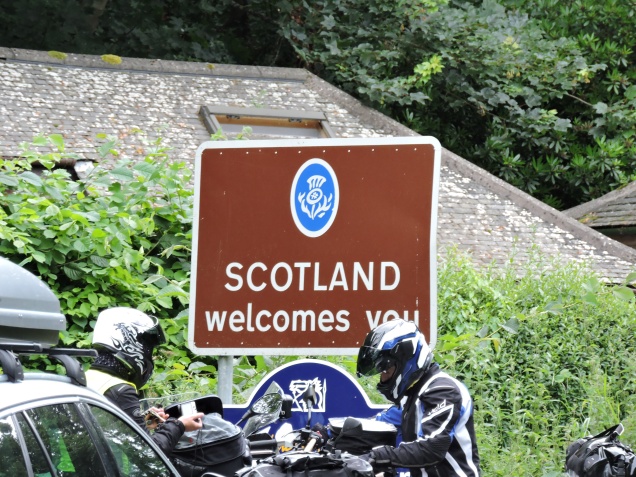 High above us, on both bridge towers is a a plaque in the form of an intertwined rose and thistle bearing the legend:

On the English side there is information relating to the fact that this icon of British civil engineering is nearly 200 years old now and much loved by local communities on both sides of the border.  Fundraising is underway to complete a major programme of restoration by 2020.  There’s a little honesty box for some donations which we add to, helping ourselves to an information leaflet which tells us that just 200 metres uphill from the bridge on the English side is the Chain Bridge Honey Farm with Honey Museum Visitor Centre and a tea shop in a double decker bus!  Well…..how lucky is that!

Off we trot up the hill.  Chain Bridge Honey Farm ( http://www.chainbridgehoney.com )  was started by beekeeping advisor William Selby Robson in 1948 and subsequently expanded into a successful commercial enterprise by his son Willie on Williams’ death in 1962.  The bees came from local retiring bee keepers and were kept in hives made from a local timber known as Thuja – which is very light and resistant to decay.  There are now nearly 2000 hives on the farm……although we couldn’t see a single one, even from the upper deck of the double decker bus!

The Honey Farm has the most amazing little museum and visitor centre, absolutely full of intricately researched information all about bees and honey and bee hives as well as a whole room devoted to information about the building of suspension bridges.  Much of it is hand-written and illustrated and all of it is fascinating.  I was a bit slow though – I was so looking forward to tea on a double decker bus that I didn’t even think about looking up those bees we saw earlier.  We bought some honey (well you have to really don’t you) and wandered off to find the bus.

Will you just look at that!  This bus originally ran on the Bristol to Bath route and the upstairs is beautifully converted.  We had a lovely tea of scones and jam and honey cake.

All too soon we have to leave the farm, head back downhill and recross the border into Bonnie Scotland.  We make our way back along the footpath towards Paxton House, passing our original trail uphill and carrying on along the river a little way before turning left and up a steep hill, through the woods, back to the house. 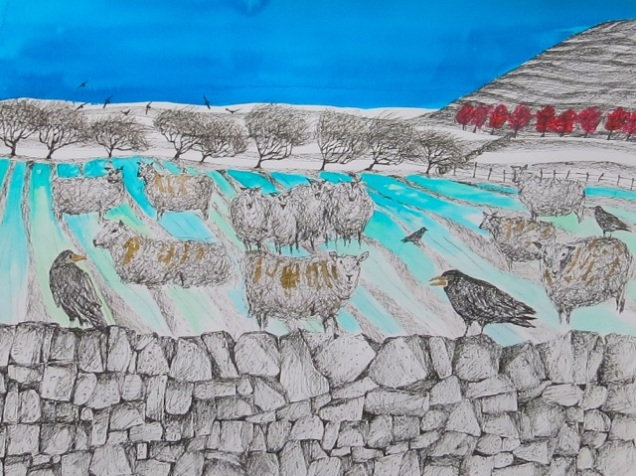