A nearly 5 mile circular from Sir Walter Scotts House visiting Cauldshiels Loch on the way.  You can read about the walk which we’ve done before, here: Two Lochs and some views .  It was May last time we walked here and there were lots of wild flowers about.  It was too early for those this time, we saw some hawthorn just coming into flower and the wild garlic is budding up now but that was about it.

Last time I showed you these logs:

and said that we were discussing whether the woodland would be replanted.  Today here are the same logs:

These look like the same piles of logs to me and there’s no sign of any planting going on.  It’s difficult to say why the logs are still here, there are still signs saying that forestry works are taking place but the acres and acres of deforested land don’t seem to have been worked.  Some of you may have seen Countryfile on BBC TV (Countryfile) recently when there was much discussion about the dangers of not replanting and the gaps there will be in the logging industry if this doesn’t happen very soon – like starting now.

The Forestry Commission has recently reported that because harvested trees are not being replaced Britain is in danger of losing it’s productive forest resource.  The report points out that some harvested forest is replanted with broadleaf species but much is left fallow and unplanted. This has long term implications as Britain is already the world’s third largest importer of timber and wood products.  Of course, we don’t often like seeing huge swathes of land given over to coniferous forests, but there’s a whole industry and and estimated 40,000 thousand jobs in Britain dependent on it.  In Scotland alone the forestry industry contributes over £1 billion annually (Forestry Commission).

Of course, as the Woodland Trust report “The State of the UK’s Forests, Woods and Trees” noted in 2011, there’s more to forests than just timber or wood fibre factories; they are vital for wildlife and substantial stores of carbon as well as being important for leisure purposes and just good to look at and be in ( Woodland Trust.) With only 13per cent woodland cover, the UK is one of the least forested places in Europe so whether new woodland is made up of native species, forestry for industry or a mixture of both, its vital that we get planting.

Have a read of the Woodland Trust report – its easy to find on the website and is easy reading and watch the Countryfile programme on iplayer if you can…..its very interesting.

Now, moving on….here are some pictures from the walk… 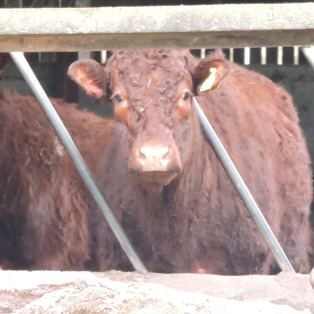 These cows were watching our approach up the hill towards their barn with a wary look…..or maybe they just couldn’t work out what the sound of my puffed-out heavy breathing was!

I think this is probably Birch Polypore, a parasitic fungus which enters wounds on Birch trees and causes their death.

Across the other side of the loch we’ve spotted three swans amongst the reeds and are watching them when suddenly….. an eruption of flapping and furious paddling across the water. Not sure if this is a fight…or its part of some mating ritual… 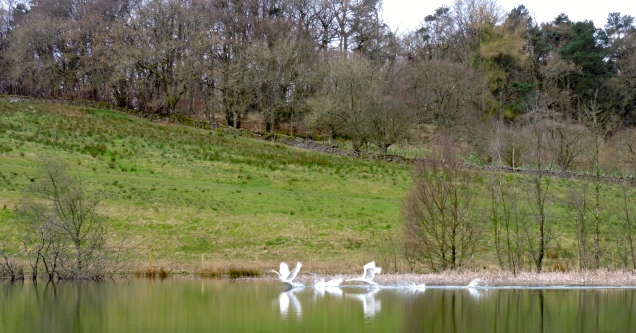 In between fleeing and pursuing there’s calm floating….

This one stayed in the reeds exuding calm and serenity…

Down by the riverside there’s competition for the footpath….

For those who are interested…I’m a bit behind on the 1000 mile target but I’ve walked 191 miles so far this year….not bad do you think? I hope you’re getting out for some walking too!