Just returned from a ramble from Abbotsford House – home of Sir Walter Scott you’ll remember – along the River Tweed which was grey and murky today.  It was a grey and murky day……no sunshine, and the tracks were back to mostly mud rather than mostly  snow and ice – shame really – mud’s not so pretty!

The River Tweed and Tweedbank (4 miles)

Starting at the Abbotsford House visitor centre we head downhill towards the river along the track where, every year the appointed ‘Braw Lad’ leads a group of riders on their way to Galashiels across the river at Abbots Ford.  The ceremony is part of the ancient Border’s wide tradition of riding around the towns, as happened in medieval times, when it was necessary to protect land and livestock from English marauders.

We turn right following the Borders Abbeys Way along the river.  Across the river, it is said that over 300 species of non-native plant were recorded in flower during the 19th Century.  Apparently during the that time, when Galashiels was flourishing due to the wool industry, sheep fleeces were transported here from all over the world.  When they were washed in the mills the seeds were carried down the river via the fast flowing Gala Water and germinated on the river bank. Most species haven’t survived but some have become invasive causing problems to native wild flowers and plants.

It’s not the right time of year for seeing many wild flowers now of course, but I did spot this log sporting a thriving conifer and a fern amongst other plants, looking just as if it had been planted up for display. 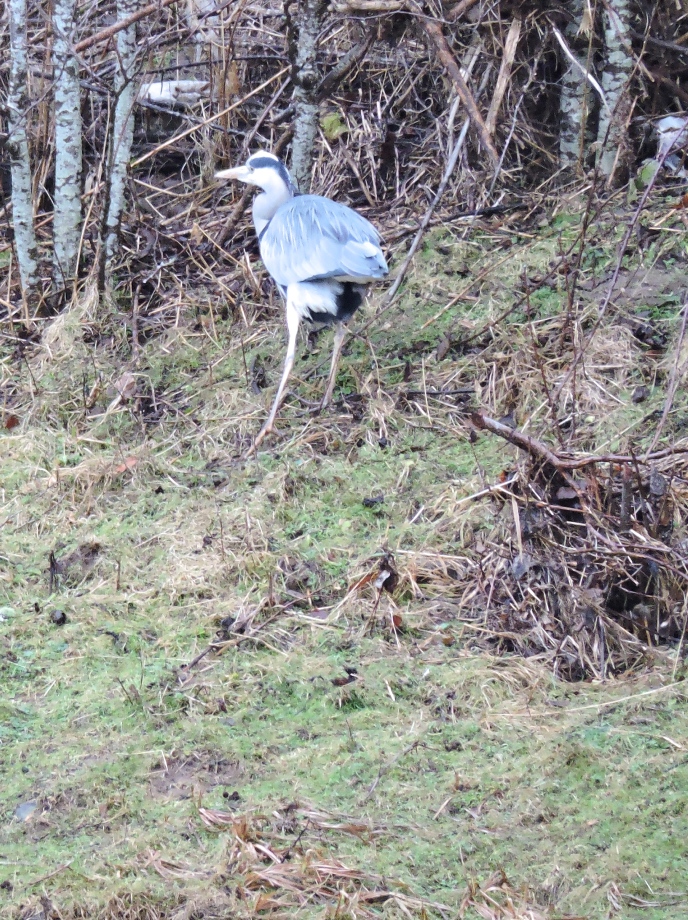 one of several herons we see today along the river side. They need unpolluted water with a sustainable supply of food, so this river must be perfect for them.  Herons don’t usually migrate and some even come here for the winter from Northern Europe.

Continuing along the path we soon approach the Victorian Redbridge Viaduct which now carries the very popular reopened Tweedbank railway line into Edinburgh.  We hop up the steps to see the view from the top and then back down again to walk underneath. 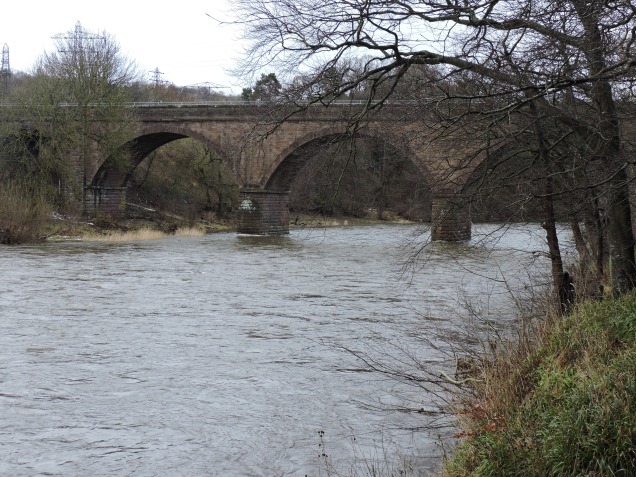 As we walk on towards Lowood we pass a tree with very distinctive bark – impossible to say what it is, but I like it: 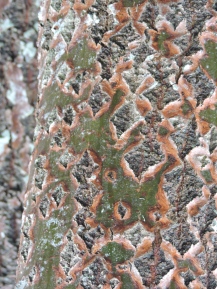 We also stop to have a look at some lovely sheep – I think they’re Jacobs.  A small flock just like these have recently appeared in a field near us. I love their colour and their thick, spotted fleeces. We’ve got a lovely book at home called The Complete Book of Raising Livestock and Poultry published in 1980 – not that we’ve ever raised any livestock or poultry (I don’t think the cat or the tortoise count) but the idea of it is nice.  Anyway, it tells me that the biblical breeder Jacob gave his name to this breed and they are all said to be descended from his flock – although it’s actually likely they originated in Spain – hmmm?!

Lowood Bridge – also known as Bottle Bridge –  is ahead of us now.  Usually we walk to here from the opposite direction starting in Melrose (read about it here: Meandering around Melrose ) so its interesting to see the bridge from the other side.

From here its uphill to the road through Tweedbank Industrial Estate and then into the woodland which lies between a housing estate and a busy road.  The road is noisy and difficult to ignore and there’s not much to see in the woodland given that its supposed to be the Solway Woodland Trail.  I can’t find any information on-line about this trail so I suppose it must be a little neglected.  There’s evidence that parts of it have been previously dug up – probably to lay electricity cables for the nearby housing:

but apart from that we see nothing except evidence of bears and toucans: 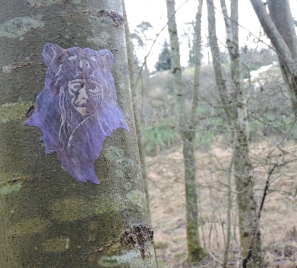 2 thoughts on “The River Tweed and Tweedbank”