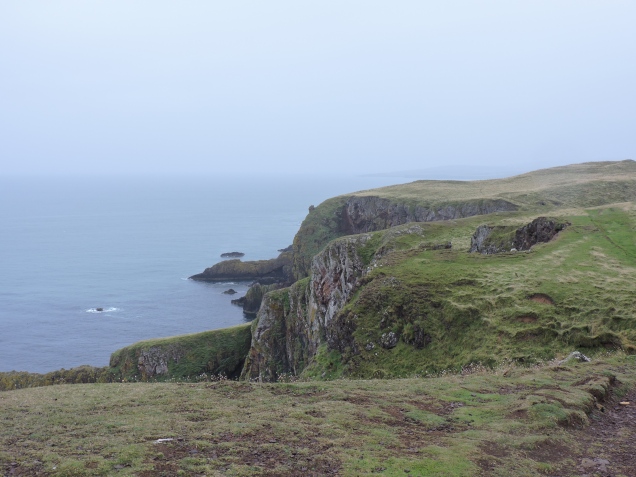 What a stunning walk!  Despite the rain and fog, this may be one of the best walks yet since we’ve been in Scotland.

Following on from last week’s ramble to Coldingham Sands, we decided to explore the coastline further. This National Nature Reserve managed by the National Trust for Scotland is just along the road.  At some point we’ll put them together to make one longer day out – with soup and sandwiches in our back packs I think!

I hope you enjoy reading about it:

The very craggy coastline near St Abb’s Head was formed by ancient volcanic eruptions – 400 million years ago.  This lava rock is so resistant to erosion that St Abb’s Head will probably eventually become an island, as it lies alongside the softer sedimentary rock which is gradually being eroded.  The valley in which Mire Loch is situated actually lies on a fault line separating the two kinds of rock.

We start off along the coast path looking down on Starney Bay:

Behind us as we climb upwards, views across to St Abbs Harbour:

We pass by Horsecastle Bay:

and then start a long, slow climb uphill.  As we ramble upwards, downwards comes the rain and we have to stop to struggle into waterproofs before continuing uphill in a steady downpour, to the lighthouse on St Abb’s Head itself.

We pass the headland and turn down a tarmacced road which will lead us to the footpath alongside the loch:

We continue alongside the loch, entranced by the mirror like water which is reflecting the bullrushes and the woodland above and the ruined boathouse on the bank:

On the way I notice the gorse is flowering:

and we see these ancient hawthorns bent by the winds sweeping inland along the valley from the sea:

Then it’s uphill and along a road, glancing back at the striking, hummocky landscape:

before returning to the National Trust Visitor Centre for a quick lunch: 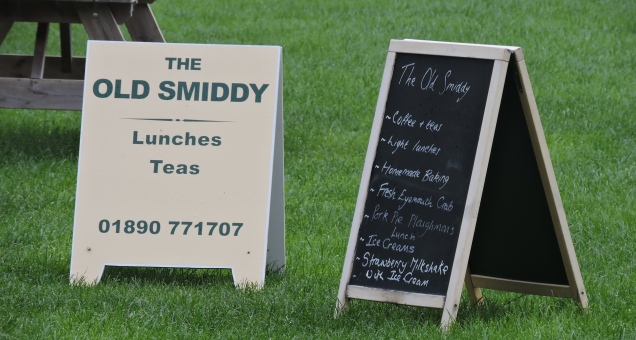 and then a brisk walk into St Abbs, passing the gates of Northfield House and spotting this sculpture representing St Æbba, above the gates:

As we make our way back to the car, Mr RR takes a quick diversion – to scramble down the ‘closed’ footpath and secure himself that driftwood he’d been lusting after! Tch Tch!!

One thought on “St Abb’s Head and Mire Loch”