It’s been a good first week of the year for walking – a bit on the chilly side but very little wind and clear skies.  I’ve managed several local walks since I last wrote and today Mr RR and I took ourselves off to see the Waterloo Monument which is at the top of Peniel Heugh, and at 48 metres high can be seen from quite a distance.  We’ve often driven past commenting  that we must go and see what it is one day – and now we have!

We followed directions from Robbie Porteous’ little book ‘The Scottish Borders – 40 favourite walks’ although we could have easily found the monument by following the way marks from Harestanes Visitor Centre, near Ancrum.  I’m not sure I would agree with Robbie’s statement that ‘this walk is no epic struggle, rather an easy circuit through pleasant woodland and along peaceful backroads’!  It may not be the steepest climb but it was a long slog to the top – well for me anyway.

Leaving Harestanes to walk along the river we struggle to understand the first part of the directions in the book, but luckily we’ve walked in the woods here before and find our way up to the start of the climb with only minor debate.  On the way we pass the entrance to Monteviot House, seat of the Marquesses of Lothian – it was the 6th Marquis who commissioned the monument we’re on our way to see. If you happen to be nearby, the gardens at Monteviot House here are stunning and well worth a visit.

We follow the green arrows which point our way uphill and begin the steady climb alongside woodland – mostly beech and oak.

Behind us are views over Teviotdale towards what I think is Rubers Law: 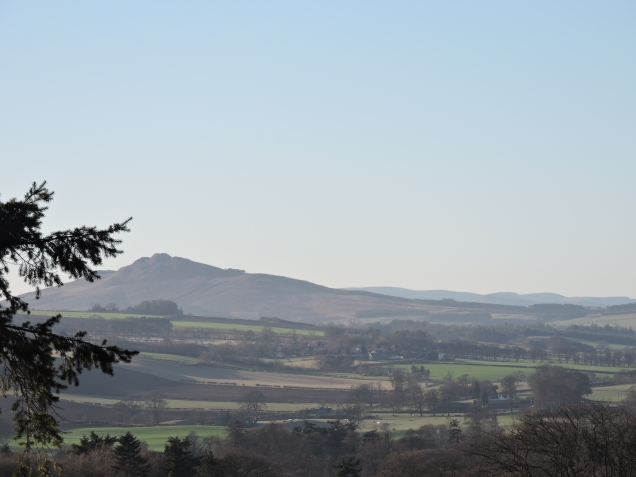 Eventually we can see the monument appearing in front of us:

and after a bit more huffing and puffing by me, I catch up with Mr RR on the top of Peniel Heugh, at the foot of this gigantic tower: 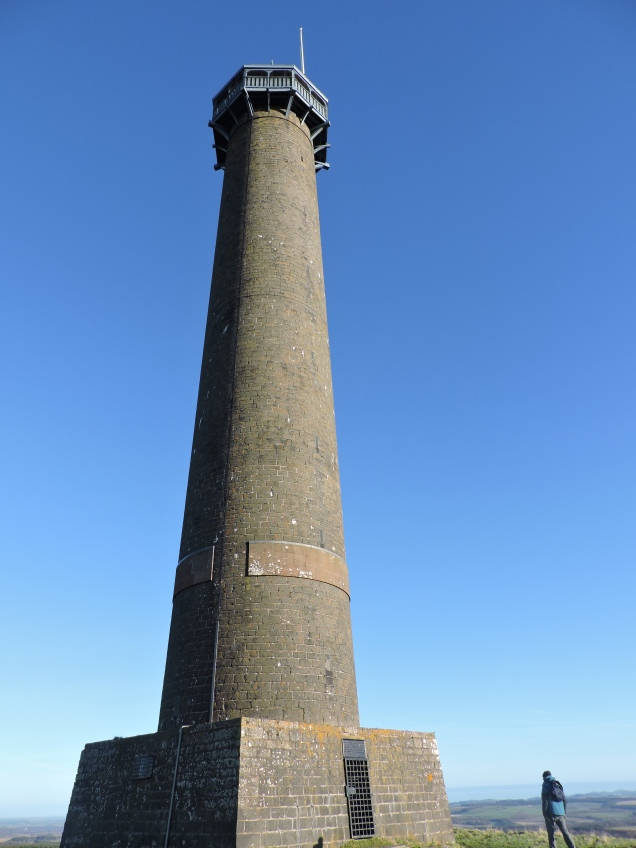 The monument was commissioned by one William Kerr, he was the aforementioned 6th Marquis of Lothian and it was completed in 1824. It was built to commemorate the Duke of Wellington’s victory over Napolean nine years earlier.  Many men from the Scottish Borders (from the Royal North British Dragoons – The Scots Greys) were among the 50,000 thought to have been killed in the battle which lasted just 10 hours. The tower is built of local whinstone and topped with a wooden pagoda:

A cast iron plaque over the only (sealed) metal doorway tells us that the base of the tower stands 774 feet above sea level and that the stonemason came from the local village of Makerston.

The skies are still clear and 360° views from the summit of Peniel Heugh are stunning.

Also to the north we can see Baron’s Folly – an ornate structure rumoured to have been built by a local baron as a meeting place for himself and his lover – built on a hill so that a servant could keep watch for the baroness!

We are making our way downhill now through more beech woods and eventually meet a minor road which leads us alongside Folly Loch – presumably named as it is situated just below the Baron’s Folly.

The Loch is partly frozen over and we spend a little while watching the mallards and teal as they step out across the ice looking just like they’re walking on water:

In the next field are a flock of swans – cleverly having decided that they aren’t going to get much lunch from a frozen loch and they’re better off foraging in the mud:

We walk on along the road, looking for a break in the wall waymarked with a Roman helmet – this will be Dere Street, an old Roman road now part of St Cuthbert’s Way and our route back towards Harestanes through the woods on a carpet of fallen leaves: 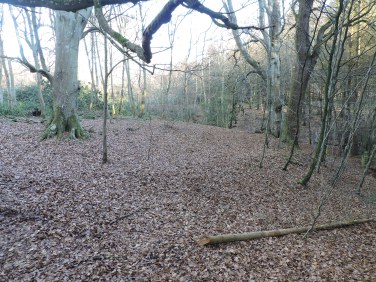 It’s a pretty walk back alongside a tumbling stream in the aptly named Pond Wood.  As we go we think of the pilgrims who followed St Cuthbert along this route hundreds of years ago – I don’t suppose it’s changed much since then, apart from the much more recently placed and very welcome board walks and wooden bridges over the more boggy bits.

We take a short detour here, entering the walled garden of Woodside Garden Centre for a very tasty bowl of celeriac and brie soup before heading back into the woods for the final half mile or so to Harestanes.

I hope you enjoyed this walk!