After saying yesterday that the blackberries were not yet ripe at Mullion, I decided to take myself for a walk around the Penrose Estate and followed the top path which is lined with brambles, to see if things were any further on there.  There were a few juicy ones to be had but it’ll be another couple of weeks I think before they’re really ready.  I came back with just about enough for a pie though.

You remember yesterday I was trying to discover why blackberries go from green to red and then black?  Well today, quite by chance I found the answer!  Isn’t it funny when things happen like that?  I was really just trying to find out which berries these were:

when I found a whole section in my Reader’s Digest Field Guide to Trees and Shrubs about berries.  So ……what it says is that the main evolutionary objective of plants (and animals obviously) is to develop efficient means of reproducing themselves.  Trees and shrubs do this by producing seed bearing fruit for dissemination by the wind or other means.  It’s the ‘other means’ which is important for us.  When fruit turns red and then black, it draws the attention of birds and animals, which obviously eat the fruit and then redistribute the seeds!  I knew that really!

As well as that, most berries are rich in sugars, starch and other nutrients and are eagerly sought out by wildlife.  Those such as rowan and yew are eaten whole, the seeds they contain have hard outer coats and resist digestive juices, therefore passing intact through the animal or bird, usually landing far away from the parent tree so that it has a space of its own to grow in.  Others, like cherry are not swallowed whole.  Birds eat the fleshy covering and discard the stone containing the seed, again often away from the point of origin.  Interestingly, the seeds of mistletoe stick to the birds beak and they wipe them off on branches of trees – on which they then grow!  How clever is that!

Anyway, there you have it.  Blackberries go red then black to attract the birds and animals that eat them, they swallow the seeds and then poo them out later!  I did know that really…..

I walk on along the lane managing to gather a few ripe blackberries, enough for a pie anyway. I stop to look at the field of sweetcorn:

and I spot this little fellow, clinging on to a stalk and swaying in the brisk wind:

and then, as I turn the corner onto the farm lane I see a strange sight.  In the field to my left are tractors – nothing strange in that you may say…….but there are loads of them: 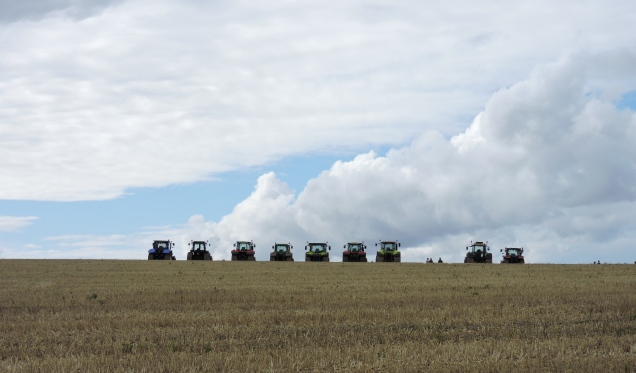 At first, I think they’ve all gathered together to take part in the harvesting – but that’s odd because the hays already been cut.  I walk on trying to work it out.  As my view becomes clearer I can count up to 30, or maybe even more, tractors in this field, some with trailers laden with what looks like sand: 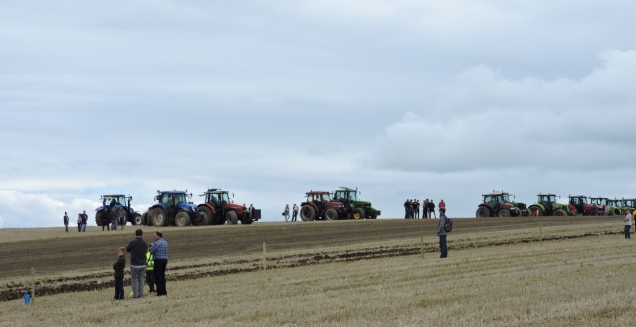 Eventually I guess, when I see all the people watching them, that it’s a competition!  It’s very well attended and everyone seems very excited. 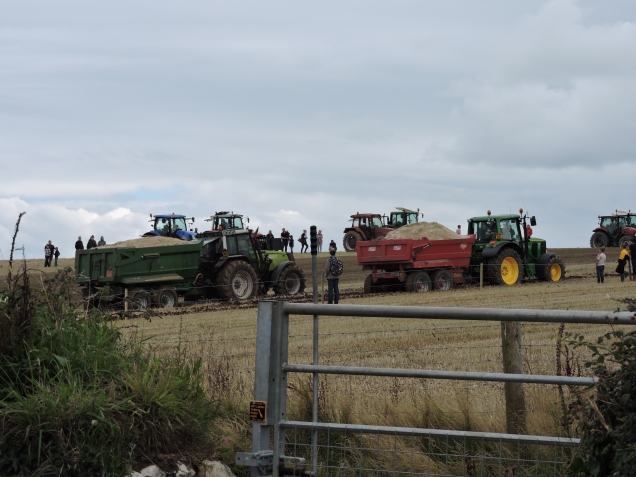 Walking on past Penrose Farm I spot a marquee and a sign saying YFC Ploughing Competition and I realise that it’s the Young Farmer’s Club having a bit of a fun day.  Although they probably wouldn’t thank me for calling it that – I think it’s serious stuff this tractor driving/ploughing competition thing.

The Helston and St Keverne Young Farmer’s Club (www.cornwallyfc.co.uk) is part of the Cornwall Federation of Young Farmers which was formed 77 years ago and has over 750 members – quite a lot of them being here today I think!

As I move on past the farm I see that the cotton thistles are just going over:

and the Hedge Bindweed is in flower:

Although it’s a very common plant, it is quite interesting.  The flowers stay open all night apparently – but only if there’s a moon (and no, I am not staying up all night to check!)  They don’t have any scent, but they manage to attract the hawk moth which uses its long tongue to extract nectar from the base of the flower and pollinates the plant.

Bindweeds once shared the generic name of Convolvulus – a reference to their ability to wrap themselves around stems and branches.  In the 19th century a Scottish botanist, Robert Brown thought its distinctive structure justified gin gin it a new name and called it Calystegia derived from two Greek words, Kalyx – meaning cup, and stage – meaning covering.

In The Medieval Flower Book, Celia Fisher mentions that it was once used as a purge – but a dangerous one unless used in small quantities mixed carefully with sweeteners and spices. she goes on to say that, the artist of the Carrara Herbal described the plants ‘undeniable beauty’ and indeed it was encouraged to grow over arbours both in the Islamic gardens of Spain and here in 15th century England.  Now of course, we spend a lot of time trying to get rid of its nightmare mass of underground roots!

I hurry on as, despite the promising start to the afternoon, it’s starting to rain and not only am I coatless, but I’m wearing just a sleeveless vest (and some shorts of course!).