We’ve been a bit busy recently but after several days of dreary, rainy weather, a little bit of blue sky encouraged us to venture out today.  Mr RR suggested walking backwards around The Lizard!  On noticing my incredibly dubious expression and hearing my cry of dismay…..after all I’m not very good at staying upright walking forwards, heaven knows what the outcome would be if I walked backwards…..he hastens to clarify.  Instead of starting from Lizard Point and walking towards Church Cove as we usually do, we should go the other way and walk from Church Cove back towards The Lizard.

Relieved, I happily agreed and so it began….

As we leave The Lizard Village and walk down over the hill towards Church Cove, the Sunday morning bells ring out at St Wynwalloe Church.  Mr RR remarks that this is a church we haven’t yet been inside, which is true….but as it’s Sunday and the bells are calling the locals to service, today is not the day.

We continue down past the pretty thatched cottages towards the greeny blue sea.  The sun is shining and we’re already warm, dressed as we are for the recent dampness.  We stop to remove a layer before heading uphill along the coast path.

Along the side of the path are wild rose bushes – with rosehips as big as tomatoes.

Checking out my Medieval Flower book, I see that it mentions rosehips were not used medicinally in the middle ages.  My Edible Wild Plants and Herbs book has them used in Tudor times however, in prescriptions of all kinds, including for the seemingly serious ‘chafynge specially under the eares’ ! I was just reading this morning that rosehips are a great source of vitamin C, used traditionally to ward off colds and coughs so this must have been a much later discovery.

Rosehips can be blitzed in a food processor, added to boiling water and simmered before straining well (within the hips there are woody seeds embedded in short bristly hairs which will irritate the throat – so strain several times through a jelly bag), add sugar, reduce in the pan and then store in sterile jars until needed (use within a week once opened).  If I had something to put them in I would pick some – as I definitely have a tickly throat and fear a summer chill is on its way!

There are all sorts of other recipes for rose hips in my book, including Rose Hip Soup, A Tarte of Hips and Rose Hip Jam.  I feel a project coming on…….

Moving on along the coast path we look back over Church Cove to see a lone gull perched on the edge of the cliff….he looks quite lost sitting there all on his own:

I’ve checked him out in The Pocket Guide to Seabirds of the Northern Hemisphere (I’ve got all the books you know) and he is definitely a Herring Gull – as he has a yellow bill with a red spot on ‘the gonys’ which I guess is the lower part of his beak.  My book says he has a shallow forehead (he does) giving him a ‘fierce’ expression……I have to disagree, he doesn’t look at all fierce to me!

On we go enjoying the sunshine and the views and keeping our eyes open for seals which we often spot around here.

Well, we spend a couple of minutes pondering why it’s there and why it’s empty before we conclude that someone in Church Cove must have another little boat to get out to this little boat – strange I think.  Why not have just this one little boat and take it further into the Cove?  No idea!

We see no seals here but in a field on our right Mr RR spots a rabbit having a rest in the sunshine.  Mr RR makes a whistling noise –  pretending to be a buzzard (!! he does such things as this) – causing bunny to perk up his ears – they’re enormous don’t you think? 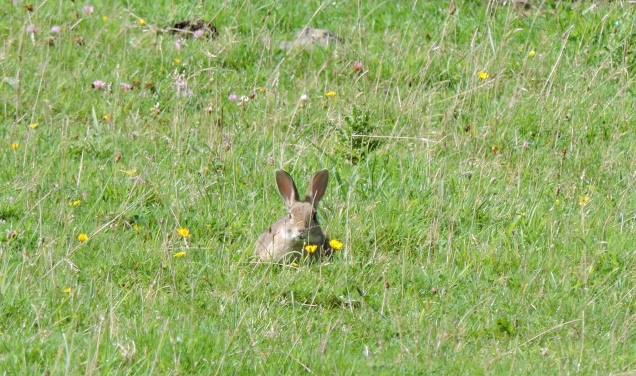 On a  second whistling, the poor thing decides that, although this looks something like a human being, it sounds like a buzzard and that’s a risk not worth taking:

We continue along, up and down the valleys, past Housel Bay and on towards the lighthouse. We spot a pair of robins singing happily to each other, one perched on the cliff edge and this one  amidst the blackberry bushes and ferns lining the path:

As we near the Coastguard Station we notice a new plaque and information board: 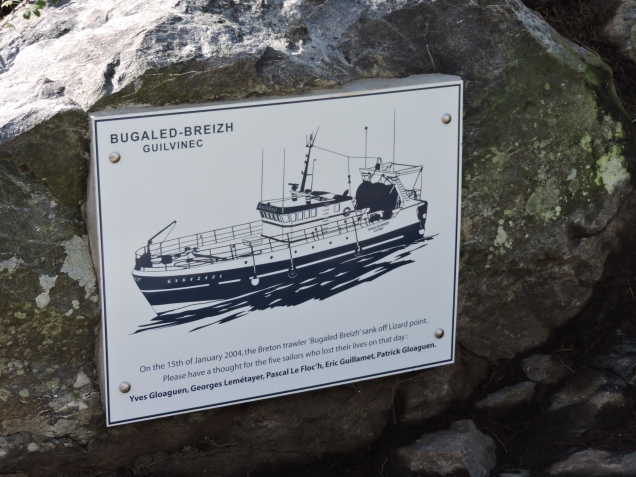 The sad story is that, the weather was fine at the time of the accident and there was only a brief call for help suggesting that the French trawler sank very quickly.  Reports and an inquiry found that the most likely explanation is that a submarine became entangled in it’s fishing nets and pulled it underwater.  It hasn’t been established which submarine and there are suggestions that a spy submarine might be to blame, although there may have been  a NATO exercise taking place in the area at the time.  As no country accepted responsibility for the accident, neither the families of the crew, who all died, nor the owner of the trawler have received any compensation.

Still searching for seals, we decide to continue on along the coast path for a little longer, until finally we see a couple, treading water and enjoying the sunshine:

Satisfied, we march on past Lizard Head and turn inland along a muddy and partly flooded lane towards Lizard Village for a cup of tea and bowl of chips (no cake!!) at our favourite cafe.

2 thoughts on “Around the Lizard Backwards….”