I was just counting up the walking weeks since January – I’m exactly halfway through the walking year – the 26th week of walking. That means by the end of this week I should have walked 520 miles to keep on target.  So far I’ve walked 451 miles.  Hmmm…..just a little bit behind!

So…a bit of catching up to do if I’m to complete the 1000 miles in a year.  I have to confess, it may not happen.  There’s such a lot going on at the moment that it’s getting difficult to fit in the miles.

However, I’ve learnt so much since I started.  I can identify loads of wild flowers ( I do sometimes annoy Mr RR by testing him while we’re out walking!), some butterflies and insects and I’m getting better on the birds.  I’m not much good on trees though – watch this space!

Today we wandered around the River Fal at Trelissick, found some tracks we hadn’t walked on before and saw a heron – which, as you know, is one of my favourites:

There were lots of other things to see as well!

We decided to walk in the other direction today – something we do sometimes when we’ve done a walk lots of times.  Amazing what you see going backwards!

We start down the steep spiral hill towards the river pausing to take in the scene from the viewpoint:

At the bottom of the hill we turn left and cross the stream and then the little wooden bridge over the water.  But first I stop to look at this:

This is one of the many types of ‘bracket fungus’ – a fungus that causes decay in trees and may eventually lead them to topple over. These visible structures are the fruiting bodies of the fungus which is already causing problems within the tree.  They can be up to two feet in diameter, so these are relatively small ones, but the groundsmen on the site will be watching this tree carefully for signs that it needs to come down especially as its right on the edge of a well used track.

On the other side of the bridge we turn right and walk through woodland alongside the river.  Since I’ve decided to try and learn one tree every walk, we start here: 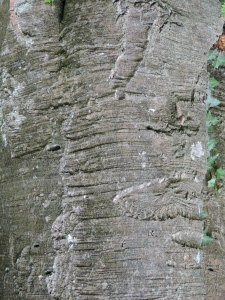 The Beech Tree, my book tells me, is tall and lofty with a smooth, greyish trunk, and a beech wood creates a thick canopy which casts dense shade preventing growth of plants beneath it.  Therefore, in springtime before the trees are in leaf, bluebells and anemones flower, but in the summer time the woods are dark and colourless.  The roots thrive in shallow soil spreading laterally just below the surface.  Jays, wood mice and grey squirrels feed on the beech nuts, from which an oil can be extracted used in the olden days, as fuel in lamps and for cooking.

My lovely book Edible Wild Plants and Herbs lists roasted beechnuts, beechnut nibbles and even beech leaf gin (may have to try that one!!) amongst its recipes.

That’s my education for today then!

Walking on along the path we spot a heron, then an egret alongside a pair of curlews down on the river banks, the tide is right out and they’re all foraging for food.  I try to get nearer, hoping to get some pictures:

This all takes some time during which Mr RR has wandered off and found a notice board with a map showing some footpaths we’ve not taken before:

so….after making our way along to Roundwood Quay and taking in the views:

we double back and find the track up the hill and through a series of meadows full of butterflies and bees, enjoying the wild flowers.  Apparently there are skylarks nesting here too and there are notices asking people to keep their dogs on leads in the meadows as, if disturbed the skylarks will leave their nests, and their young, and may not return for some time.

The butterflies are very flighty I have to say!  But eventually we manage to creep up on a couple:

And then we see an enormous dragon fly.  I fail to get him on camera but Mr RR spots a second one and as he lands, swoops in for a picture.  It’s a beauty – a Common Goldenring (or Golden-ringed) Dragonfly.  These can be up to 85mm long and this one probably is!   See how he’s hanging on to the underside of the fern with his tiny feet, and look at those wings – like gossamer:

We’re pleased with our finds today and head down over the fields towards the woods. On the way we spot these:

These are Common Red Soldier Beetles – quite small but easily seen on this hogweed because there are so many of them.  Because of the colour, they’re often known as bloodsuckers but they are, in fact, quite harmless to humans.  My insect book tells me that they are abundant in flowery places, especially around umbellifers such as this hogweed and are frequently seen as mating pairs – as here!

Whilst we’re on hogweed, did you know that  it often used to be gathered for pig fodder (hence its name) and that children used to use the hollow stems of this plant as pea-shooters? When boiled the young leaves apparently taste like asparagus and were once considered a delicacy.  However, both the common and the giant hogweed contain a substance which is volatile and can cause blisters in humans, especially in hot weather – so best leave it alone!

We leave the butterflies and beetles to their meadow and head back through the wood, across the bridge and alongside the river, following the path all the way back to the gardens at Trelissick.  Here we turn uphill and after a long hot climb make our way to the cafe for lunch and a well-earned cuppa.